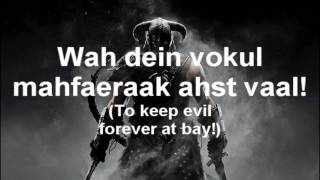 "Ha ha, Alduin... here I come." Said the Dovahkiin as he went to Sovngarde, to face Alduin, the world eater. But little did the Dragonborn know, Alduin had actually tampered with the teleporter to make anyone who was not 100% Dragon to be sent somewhere else, into a different dimension. "Ugh... where am I, this does not look like Sovngarde, or is it?" Said the Dragonborn, as he noticed a group of people, he went to them. "You... yes you, can you tell me where I am?" Asked the Dovahkiin.

"Ummmm... were at Canterlot High... who are you." Said one the had Rainbow colored hair.

"I, am Tamenth the Chosen." The Dovahkiin answered proudly. "Who are you?"

"Well, I'm Rainbow Dash." She answered back, just then the bell rang. "Well see you later.

As Tamenth entered the school, he heard singing. "Ugh, what is that horrible noise?" He asked himself. Then he saw two girls talking to each other and decided to eavesdrop.

"Oh, I'm really sorry. I-I just found it, and-and I thought I should give it to her. I didn't know you had dropped it." Said the shy one.

"Well, I did! And I was about to get it before you swooped in and ruined everything! You shouldn't pick up things that don't belong to you." Said a red and yellow haired one.

"It... doesn't really belong to you, either." She whispered.

"That's what I thought. It's as good as mine, and you know it. You really are pathetic. It's no wonder your best friends are all stray animals." This started to get the Dovahkiin mad, he then decided to stand up.

"How dare you speak to her that way!" Said a girl with purple hair.

"What did you say?

"I think you heard her quite well, but fine, she said "How dare you speak to her that way!" Said the Dovahkiin jumping in.

"You two must be new here. I can speak to anyone any way I want." She said back.

"I can't believe you did that!" Said the shy one.

"Aye, and what were we supposed to do, sit there, and watch someone get bullied?" Asked Tamenth. "No not on my watch."

"Well, it's just that nobody ever stands up to Sunset Shimmer."

"I don't think I've seen you around before. Did you just transfer to Canterlot High from another school?"

"And I am Tamenth." Said the Dragonborn.

"Sorry, what was that?" Asked Twilight.

"It's Fluttershy." She seemed even more quiet this time.

"It sounds like you're saying Fluttershy, but how can that...?"

"Oh, my goodness! Who's this sweet little guy?" Asked Fluttershy

"Where did that little mutt come from?" Asked Tamenth, he was given a mean look by both of the girls, and the dog.

"Oh, wouldn't ya just give anything to know what they're really thinking?" Asked Fluttershy

"He usually just tells me." She said

"Oh, uh, nothing! (chuckles) Never mind. Sunset Shimmer said you picked something up. Something that belonged to her. It wasn't a crown, was it?"

"How did you know?" Asked Fluttershy.

"Uh, lucky guess? Do you still have it?" Asked Twilight.

"But you know what happened to it?" She asked again.

"Mm-hmm. This morning, I was passing out flyers for the animal shelter like I do every Wednesday." She told us. "I have no idea how it got there. But I didn't want anything to happen to it, so I decided to give it to Principal Celestia."

"You could say that. Technically, I guess she and Vice Principal Luna do make the rules." Fluttershy answered.

"Where is she now?" Twilight asked, for the fifth time.

"Probably in her office. Third door on your left."

"Oh, wait! You're not really supposed to have pets on school grounds. Might wanna tuck him into your backpack. That's what I do." Then some animal noises came from her backpack. "They just get so lonely when I'm in school all day."

"Oh, okay! Thank you!" Just then the bell rang.

Twilight and Fluttershy went in different direction, the Dovahkiin decided to go with Fluttershy.

"Well, umm, I don't see why not." She said, and they both entered the room.