At the ponyville hospital, everyone and everything was quiet as Fluttershy and her friends waited for Nurse Redheart. Lightning was sitting on Twilight's lap as the she held him close to her and gently rubbed up and downs his side with her hooves. Lightning had cried himself to sleep in Twilight's forelegs but he was still shaking uncontrollably as Twilight softly hushed him and hummed a soft melody in his ear like she did the night she first met him. Fluttershy was pacing in the waiting room back and forth while occasionally looking back at her sleeping son. Nurse Redheart soon came out with a clipboard in her mouth and Fluttershy immediately ran over to her.

"Oh, please, Nurse Redheart, tell me my son will be okay." Fluttershy said in a panicked tone as the nurse softly hushed her and put a hoof on her shoulder.

"Shh...It's alright Fluttershy," Nurse Redheart said sweetly "your son's going to be fine, he just has some minor irritation on his legs and wings and a black eye that will recover in time. He's going to need a few days to recover but he will be fine. Now I suggest you take him home and let him rest, we're going to be closing soon."

As nurse Redheart left the room four familiar faces walked through the door, It was Spike and the CMC.

"Lightning!" They all shouted happily as everyone quickly hushed them so they didn't wake the sleeping colt in Twilight's embrace.

Lightning began to wake as he looked up at a gentle smiling Twilight before seeing his friends.

"Spike, girls, Your here!" He shouted as he jumped off of Twilight and ran towards them.

The four embraced him in a group hug as the adults watched on with soft smiles.

"I thought I would never see any of you again." Lightning sobbed happily as they hugged him. He eventually broke the hug and Scootaloo immediatly embraced him again while crying happily as Lightning did the same. Spike and the others watched as Twilight quickly grabbed the baby dragon with her magic and embraced him along with Fluttershy.

"Spike," Twilight began "I cannot be more thankful or more proud of you than I am now. If it weren't for you. We would never have found Lightning. You are a hero to all of us Spike."

Twilight gently kissed the baby dragon on the forehead and continued to hug and hold him happily as Spike returned the hug and said nothing,

"I was worried sick about you Lightning!" Scootaloo said before crying again. "I'm so sorry I couldn't stop your Dad from taking you away!"

Scootaloo continued to cry in guilt and Lightning softly nuzzled her to calm her down.

"It's okay, Scootaloo, my Daddy's gone now. Thank You for trying to help me." He said softly and sweetly to her before hugging her again.

Spike eventually fell asleep in Twilight's embrace and Twilight levitated him onto her back.

"It's getting late everypony, I think we should all head home." Twilight said gently.

Lightning let out a tired yawn as Fluttershy picked him up and rested his head against her neck.

"Aww..but we just saw Lightning we want to make sure he's okay before we leave." Applebloom complained earning a nod from Sweetie Belle.

"No buts Applebloom," Applejack said "Lightning's going to be fine. Ya'll can check on him tomorrow."

"The same goes for you Sweetie Belle." Rarity said as Rainbow picked up Scootaloo and put her on her back.

"Let's go home Scoots' I'll see all of you tomorrow." Rainbow said before flying off. The others said there goodbyes and left the hospital, leaving Fluttershy alone with her son who was starting to fall asleep in her forelegs.

Fluttershy gently kissed him on the forehead and said, "let's go home, sweetheart."

Lightning nodded his head and the two flew home. When they arrived at the cottage, Fluttershy opened the door and decided to let Lightning sleep with her tonight. She flew upstairs and tucked Lightning in. She then got into the bed herself and soon fell asleep.

Hours into the night, Fluttershy was awoken by her son crying and whimpering, he was having a bad dream. Fluttershy immediately shook her son and woke him up. Lightning was shaking and breathing heavily as Fluttershy pulled him into a soft loving embrace.

"Shhh...It's okay sweetheart, Momma's here." She said softly and sweetly. "Did you have a bad dream, sweetie?"

Lightning nodded his head before saying, "I was remembering what my Daddy said about you not loving a freak like me. I had a bad dream that you never wanted me and you left me all alone." Lightning began to quietly cry. "I-I was so s-scared."

Lightning then buried his head into Fluttershy soft chest fur and continued to cry. He was trying to say something but Fluttershy couldn't understand him. She rubbed up and down his side with her hoof and hushed him while speaking in the softest and gentlest of voices.

"Shhh...It's okay, sweetheart, Everythings going to be alright. Lightning don't listen to your father. Your not a freak, and I could never abandon you. I told you when I first became your mother that I love you with all of my heart. I still do, sweetie, and I will never stop. You mean the world to me Lightning, I promise that I will always love you."

Lightning began to calm down as Fluttershy gently licked away his tears. He continued to sniffel as Fluttershy sung him a soft lullaby. 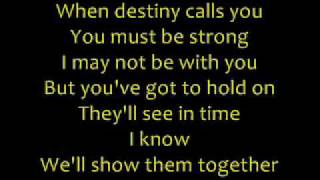 (All rights go to Phil Collins and Disney)

When she finished singing, Lightning smiled softly at his mother and fell asleep while saying, "I love you Momma!"

Fluttershy smiled at him softly and nuzzled him. She then gave him a gentle kiss on the muzzle and said, "I love you to my precious baby boy."

Fluttershy fell asleep minutes after with Princess Luna's beautiful moon shining down upon her and her son. Lightning snuggled into his mothers side and smiled in his sleep. No matter what happens Fluttershy would never stop loving him she would always be there to show him a mothers love.