Assumptions (can be pretty dumb)

Micro-Pony Party Extravaganza!
Part 1: Gulliver, you can kiss my...

Chase Smith lived alone. Mostly. He had a whole bunch of MLP merchandise, and a bunch of LEGO sets, an entire city of which took up his entire spare bedroom, and that was the closest thing he had to friends. And the people at the correspondence office at the Evil Genius At Home Society, who had sent him the schematics for what they called a ‘Trans-Universal Exploration Ring©’

He’d spent some time working on it, carefully building the entire thing to the exacting specification in the instructions, just like with his LEGO sets. He even built the optional pre-viewing screen, the one in the back of the booklet after the instructions glossary.

Carefully tuning the screen, Chase carefully honed in on the receiving world. For a moment, he thought it had malfunctioned, simply showing a world he was quite familiar with: Equestria. Looking closer though, he realized that this wasn’t from any episode he’d seen... and he’d watched every episode faithfully, even tried to model himself after his favorite pony, Applejack. He even owned two apple tree that he harvested from personally every year and sold from, and kept himself in remarkably good shape for a computer nerd.

Steering the viewpoint closer to the town, he wished he’d found some way to add an audio component to the viewer. Rather suddenly, an iconic pink face burst into view, startling Chase rather badly.

Pinkie was pointing and giggling, and Chase had to admit, it probably did look really funny. He worked his way back up to the viewer, and saw that Pinkie was drawing weird looks from the other ponies, but they quickly stopped paying attention. She waved at him, and took out a sign that said ‘I’ll have a party ready, Chase!’

Grinning broadly, as Pinkie was his second favorite pony, he quickly began hitting the switches and tapping the buttons that would activate his gleaming metal archway. A pale, blue-green light shimmered into view inside the ring of metal components, LEDs lighting up in sequence to announce the safety of using it to travel.

Chase looked to his toys, saluted his army of LEGO figures, and turned back to the gateway.  Pinkie’s there, waiting with a party, just for me. I can’t let her down!

With that thought he stepped through gingerly, hearing a small crunch as his foot came down in the new world. He finished passing through, the portal frame flashing brightly into view for a moment in the skies of Equestria...

And suddenly, Chris felt... odd. Not bad, certainly, but odd, nonetheless. He looked around, trying to get a firm fix on where he was. All he could see was a short patch of dark-colored bushes to one side, and a bunch of wisps of cottony mist near his face.

Preparing to move, he heard, tiny and desperate, “The horror! The horror! It’s going to crush us all!”

Looking around in fear, he finally thought to look in a very particular direction... down.

Below him, he saw a miniscule, smashed cottage, no more than nine or ten inches tall, next to which was a trio of inch-high, brightly colored ponies.

Realization hit him like a brick to the head, and so did the pegasus attacking his ear. About this time, a wash of rainbow-colored light whizzed past him in an expanding ring, a massive dent formed where it had been stopped by his head.

Turning carefully, he saw a tiny, blue pegasus attempting to karate-chop his chin from his shoulder. It was almost unbearably cute, and Chase needed somewhere to sit - and fast. taking care not to smash any more of ponyville, he carefully sat on a hill raising out of the  Everfree forest, and made a grab for Rainbow Dash. Now that he was paying attention, he could hear the lit5tle grunts and growls she was making as she swiped at the massive biped.

Dodging his fingers, Dash began circling his head. Trying to get her to stop didn’t seem to help any, and so he stood up again, this time circling around the town. This time, he wasn’t listening well enough to hear the ponies below him, one of which was yelling about a letter, another which had decided his legs looked enough like apple trees to earn a buckin’, and another that was squealing delightedly at the sheer amount of fabric this thing was lugging around.

He began climbing the mountain that the dragon in ‘Dragon Shy’ had been sleeping in, and swatted repeatedly at Rainbow Dash, who was now making many disparaging remarks about his parents and facial features.

At the top, he shouted out his frustration, as another group of pegusi began attacking him. Finally managing to grab one, he held the little, terrified thing close to his chest as a hostage. Well, this escalated quickly. How did it get to me having to take freaking hostages to get them to back off?!

Unfortunately, these thoughts were enough to invoke Murphy and his wrathful curse, and make Rainbow Dash fly forward and smack him dead in the center of the forehead, knocking him off the tall mountain.

Instinctively curling around the toy-sized pegasus in his grasp, he finally got a good look at who he’d snatched.

It was Ditzy “Derpy Hooves” Doo, and she looked scared. Then, he hit the ground, and the last thought that went through his head was, well, damn, she’s got her mailbag on. She probably wasn’t even one of the ones pestering me...

Then, he was unconscious. Not a lot of thought going on there any more.

To Be Continued!
DUN DUN DUNNNN! 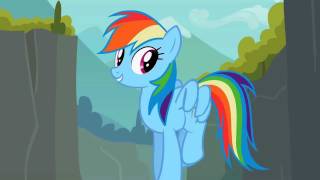