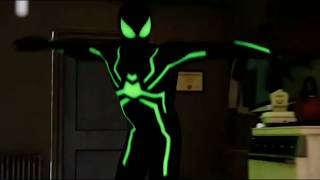 It was late at night, Adam was lying in his bed; Fluttershy laid next to him, sound asleep. All Adam could think about was how some one has taken the alien symbiote; he knows from experience how dangerous those things can be. He though, 'Every second I lie here, that creature is out there, planning some kind of scheme'; nothing else came across his mind.

There was only one thing for it, he had to keep searching for it.

Trying not to wake his beloved, he crept out of bed and wandered to his closet; he took out his suit and sat back down on the bed. While he was changing into his 'work clothes', it woke up the sleeping angel on the other side of the bed.

"Adam, what are you doing?" She asked as she turned to him. "It's only 2:30 in the morning." Adam turned to his girlfriend and replied, "I can't let the symbiote just run around the city, I have to find it." The crawled up the boy's back and wrapped her arms around Adam's neck, she rested her head on his shoulder.

"You work to hard, one day you're going to have to decide if you want to keep doing this. If you want to spend the rest of your life with me, then I can't keep worrying if your ever going to come back, every time you go out into danger." Fluttershy explained. Adam understood her words, he wasn't really going to be doing this forever; but for now, he had a job to do.

However, Fluttershy wouldn't let him stand up, "No, stay here a bit longer." he said. But the boy replied, "Come Flutters, I have to go to work. Wait for me?"

"Always." They then both shared a quick kiss before Adam put his mask on. The boy then climbs out the window and swings off into the city; leaving Fluttershy alone, only to worry for his safety.

In a warehouse, on the docks of the city, an evil creature was put together a machine to bring her brothers and father to this world.

"We must hurry, father has told me about the spider that will try to stop us." Babs Seed could hear the symbiote voice in her head, giving her the instructions. She knew that this could end her world, but she couldn't give up this power; it felt like she could take on the Spiderman, get back at him for destroying her camera and all her hard work. "We still need one more thing to power the trans-dimensional portal, a power source."

"Don't worry." Babs' replied. "You say we need a crystal of some sort. Well, the Crystal Eye is on display at the Canterlot Museum. Not only is worth a fortune, but scientists say that it can be worked into a laser powered energy source."

"It sounds perfect. We must steal it in order to power the machine."

So, with those words; a yellow slime cover Babs Seed's body, it shaped into it monster of a form. The creature leaped out of the warehouse window and started leap-frogging across the buildings, she made her way to the Canterlot Museum. While she was traveling, she was thought about what it would be like to meet 'The First'.

Spiderman was swing through the streets of Canterlot, he decided not to bother his friends; he would patrol on his own and let them sleep. But as he swung, he thought about what Fluttershy said to him, about one day giving up being Spiderman. Because she was right, Adam couldn't do this forever, but that was something to worry about in the future.

For now, Adam to worry about finding the symbiote. He already knew that it had found a host, so that makes finding it a lot harder. Never the less, Spidey had a job to do; he was going to find this monster, and destroy it.

After about an hour of swinging, nothing came up; Adam was just about ready to call it a night. The boy landed on a roof and looked down on his city, it was just as precious to him as the Equestria planet, back in Dimension 1. Just when Adam was going to head back to his apartment, his Spider-Sense went off.

Spiderman jumped out of the way of a blast, it looked like pink acid; when Spidey turned to the culprit, he found two unfriendly faces.

Discord and Screwball were pointing a swirty-gun at Adam, it was filled with more of that pink acid. "Daddy, you missed him." The teenage criminal states. Discord replied, "Don't worry, my little abomination. We'll get him this time." Discord fired another blast.

This time, Adam leaped over the blast and shot a web line at the gun; Spiderman pulled and yanked the gun out of Discord's hand. Adam then shot a web net at the two them, tying them together. "Next stop, prison." Adam said to the two of them. Spidey attached a web-line to them, then threw them off the roof; the web-line caused them to hang of the building.

Before Adam swung away, he called the police station to come pick them up. So as Spiderman was swinging away from the scene, two police cars arrived to take Discord and Screwball to Ryker's.

At the Museum, Scream had already broken in; the alarms went off and two security guards rushed to see what the matter was.

When they saw what had broken in, they screamed like little girls. Babs' scared them both off, leaving her to smash open the glass case and take the crystal. However, as she was walking out; something standing it the smashed doorway caught her attention.

"Hey, you know what I think. Yellow was so last season." Spiderman said across the room. He approached the symbiote creature, asking, "So, what should I call you? Because I know all you creeps have weird chaos names." This statement just made Scream more angry. "So what is it? Matter? Fear? Terror?"

"Scream?" Adam asked, trying to be funny. "Who comes up with these names?" Before the fight started, Adam looked at the shape of Scream. "Wait a sec, you're a girl." It broke the line, Babs Seed pounced at the hero; knocking him to the ground.

The fight started when Adam pushed Scream off him, and then pounced at her. He held her to the ground and started punching her down. Left, right, left, right; Adam continued to throw hooks at her, even if she was a girl, she had to be stopped. When Adam stopped for a sec, Scream saw and opening and went to bite his face off. Adam sensed the attack coming and moved away the right moment. However, the creature leaped back up and knocked Spidey to the floor again, she held him to the floor again.

"Chomp, Chomp." Scream muttered as she went to bite him again. But Adam was quick and moved his head out of the way. Once she pulled back, Adam began punching her face again; blow after blow she was losing focus. And with the final punch, Scream was thrown back against the wall.

During the fight, she had dropped the jewel; Adam web-pulled the crystal to him, he held it in his hand. "Why would a symbiote want you?" he asked.

Suddenly, without him realising, Scream came around and leaped out the window; before she was gone, she shot a web-line at the Crystal Eye. When she had it, they were both gone; Adam tried to chase after them, but it was too late.

The only good outcome of this, was now Adam knew what he was dealing with. But he wasn't going to let her get away, so he used his eye lenses to track the signal of a symbiote; Adam scanned her signature while they were fighting, just in case she escaped.

So Spiderman started swinging after her, let the police take care of the mess in the museum.

On Ryker's Island, two new inmates were being taken to their cells; they had both earned a cell in the supervillain sector of the prison.

Once the guards had put them in their prison cells, he walked off; leaving them to talk through the holes in the glass. "Daddy, why did you let Spiderman catch us?" Discord replied to his daughter's question with a confusing statement.

"Not to worry, my dear. We will be free soon. Adam's planned that we lead a gang of supervillains in season three." Discord explained. "What I mean is, we'll have our revenge on the wall crawler soon enough. Because I have something good planned."

As Discord said those last words, he started laughing like crazy.

Meanwhile, Spiderman had found the warehouse that Scream had taken for her hide out. He crawled onto the window and peered inside, "What is that?" he asked when he saw the large machine at the end of the room.

Adam watched as Scream placed the Crystal Eye in the compartment, the machine suddenly sprung to life with power. The villain activated the controls, opening a portal to Earth 1; when the vortex was fully powered, Adam saw figures walking through.

Scream's symbiote suit dissolved; Spiderman could see who was behind the mask. "Babs Seed? What?" Adam couldn't wait any longer, so he smashed through the window and into the room. Babs' turned to see what had just crashed into her lair, but then turned her attention back to the portal.

The four figures stepped out of the vortex, when Adam saw who was leading them, his heart sank.

Kobi stepped forward and stated, "Nice to see you again, Spiderman." Carnage, Anti-Venom and Toxin, still not wearing their suits, stepped out from behind him. Kobi turned to Babs Seed, he reached his hand to touch her face; she allowed him to stroke her cheek. "My daughter." Kobi muttered. "You have done well."

Adam was petrified, the most deadliest creatures he had ever faced, were now walking on his new Earth.