Star Wars: Night of the Sith 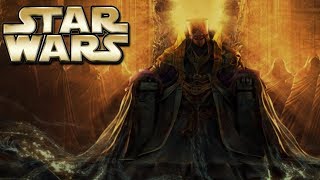 Star Wars: Night of the Sith

Peace is a lie. There is only Passion.
Through Passion, I gain Strength.
Through Strength, I gain Power.
Through Power, I gain Victory.
Through Victory my chains are Broken.
The Force shall free me.

That is the Sith code of honor that has been past down upon many people who called themselves sith for generations to come, in their beginning, the Sith were nigh unbeatable, but over time, the Sith started getting more power-hungry, and the first Sith Lord, Darth Bane, made the rule of 2, in which there must be one master and one apprentice. Ever since the beginning of the Jedi Order, The sith had been drawn into extinction, leaving behind only a handful left who had gone into hiding on the Sith Homeworld of Korriban, but a group of Sith, an ancient Cult known as the Dominion, they swore that they would have their revenge against the Jedi who had exiled them. With the war against the Crystal Empire finally over, Sunset Shimmer and her friends form the Jedi Council of Harmony. An ancient order of Jedi who has not only disbanded the Corrupt Jedi High Council but has also impeached Supreme Chancellor Neighsay and arrested him through charges of treason. The Jedi Council of Harmony has sworn to bring light to the galaxy and protect all who are innocent. But where there is light, there is also darkness, in the Sith homeworld of Korriban, Sith Lord Darth Nihilus, and his apprentice, Darth Kralik, have sensed a presence far beyond their power.

On the Sith planet of Korriban, The Sith Lord, Darth Nihilus, and leader of the Sith cult called the domain is in his throneroom, observing the broken and abandoned cities when he suddenly feels a disturbance in the force. "Droid, call my apprentice down here at once," Darth Nihilus ordered his servant droid. "As you wish, Master Sith,"
"Can you sense it, my apprentice," said Darth Nihilus. "Yes, my master," Darth Kralik replies, "This power is unlike anything that I've felt before, It belongs to someone with anger and hatred that surpasses even that of a Darth." I sense that the source of this power seems to be coming from the planet Coruscant, it must be one of the Jedi younglings at the Jedi Temple," Said Darth Nihilus "This child must be found, she cannot become a Jedi, she must become a Sith." Darth Nihilus ordered his apprentice. "I understand, my master," Darth Kralik said. "It will be done."