One night, it was late at the Castle of Chaos. The whole family, including Adam, was trying to get Zany to sleep; but the little guy is just too full of energy.

It took both Screwball's chaos magic and Adam ranger powers to finally catch him. Fluttershy took him to his bed, but he was still going at it; making things fly around, causing fire works to go off in the kitchen, & even turning Mothball into a frog. Luckily, he used his shape-shifting powers to turn himself back.

The whole family knew that the only way to calm him down was with a story, Screwball looked at the chart of who's turn it was. Because Discord wasn't here, Adam had taken over his spot; and tonight, it was his turn. So Adam prayed a little before going into the foul's room; then he breathed in, and marched into the bedroom.

"Zany, you here?" Adam found the baby sitting in his baby bed. The little guy was actually kind of cute, he could hear Zany mutter, "A-da." which made the ranger giggle.

He picked up Zany in is arms and rocked him a little, he was trying to think of a story, one with action; he knew Zany enjoyed those. "Okay, I've got it. I'll tell you what really happened when me and the other rangers lost our powers and met five Power Rangers from the past." So the boy though about where to begin, but then he explained, "Only you are going to know this Zany, so don't tell anyone. Okay?"

He didn't know if the baby could understand him, but he told the story anyway, just to make the foul happy. "I think we left the story.... ah yes, me and my friends had just defeated some of Doc Ock's robots."

When all the panic was over, I saw a large crate with the O.S.C logo on it, "There you are." I commented. The other rangers gathered around the large box, "What's in there?" Rose asked. I replied "This is going to get us our powers back."

At the Megazord battle

The five rangers from the past were trying to pilot our Titan Megazord, Cyber Racer wasn't making the battle easy; using his cyborg weapons, he blast the Megazord to the ground. Shaun, who was acting as the leader, was trying to lead the team to victory; but they had never used the kind of power before, so the were hopelessly out matched.

When the Megazord tried to get back up, Mikayla said, "Guys, it's no use, we can't fight with what we don't know how to use." Luckily, their luck had just changed; Oliver saw my team running towards the battle.

Using some of our left over magic; when we lost our powers, the magic from the element was still there, we just couldn't use our ranger powers. We were able to shrink Cyber Racer back to his normal size; after that, we had to rely on our plan to get our powers back. But the magic did work, the villain shrank back to his normal height; we saved the Power Rangers.

Me and my team were waiting there, the new rangers greeted us their; they were still wearing their suits, just without their helmets. Oliver said, "Thanks, we were sitting ducks out there." Then Ross continued with, "Yeah, but now your magic is all gone." But me and the rangers had faith in our plan.

Just as we were talking, something appeared in the room. "I say, you all look rather heroic in those suits." the gold robot said. Emma stepped forward and asked, "Who are you?" The robot replied, "I am C-3PO, human cyborg relations. Your friends brought me in to fix the Morphing Grid."

Kian pulled up a video feed of inside the grid, and it was as 3PO said, the Morphing Grid was fixed; we could access our powers again.

So Princess Twilight came to the Town Hall, with our fixed morphers; each of the new rangers handed a morpher to one of us. And just in time for the final fight, Charlie arrived from his trip around the Lagoon Nebula. With the whole team, and the new one; we could take the battle to the Evil Force Five.

Within a quarry outside Ponyville

All the villains from the past were gathered in the quarry, including Cyber Racer; waiting for their enemies to come and face them. And from the distance, the Power Rangers had arrived, to put a end to their rain of terror.

Mondo was the first out of the group to notice us coming, he cried, "Power Rangers, how many times do we have to face these, annoyances?" Me and the others just ignore his comment; we all knew what time it was, Morphing Time.

Shaun went first, as he was the oldest ranger, "It's Morphing Time; Zeo Ranger 3, Blue!" 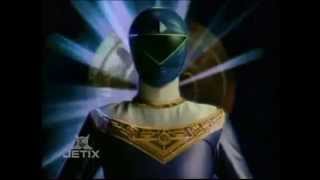 Next was Ross, "Go Galactic!" 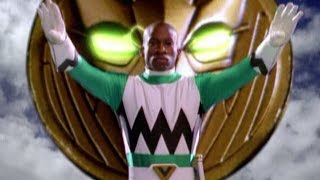 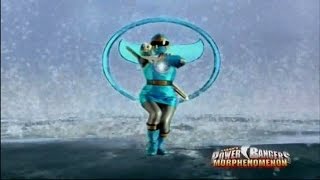 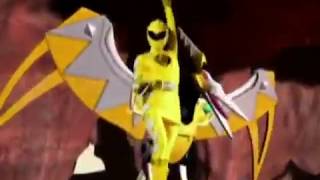 Finally, out of the new team, Oliver. "O.S.C, Emergency!" 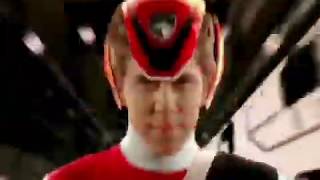 Once all of the new team was morphed, it was our turn. Me and my friends pulled out our regenerated morphers, Charlie pulled out his morpher and spoke our mystic words, "Magical Source; Harmony Force!" And we all morphed into our ranger suits, it felt good having our powers back.

The villains were very confused, Kaita even shouted, "But how, we took your powers away." Kian stepped forward and replied, "That's what you thought." Rory continued, "But once a ranger..."

Everyone shouted, "...Always a ranger!"

Once everyone was powered up, we split off into teams and ran into battle. The villains did the same, splitting up and attacking a certain ranger group.

It was a one on one match between Mondo and Shaun, the two arch-enemies fought with all their power. The Machine King blasted the Blue Zeo Ranger with his staff, but the Shaun was able to dodge the attack and deliver a strong kick to Mondo's chest; sending him rolling in the dirt.

Rory and Oliver were working together to battle Shockwave, who was blasting them with his left arm cannon. The Decepticon was determined not to lose this time, so he used all his power. One blast knocked Oliver to the ground, but Rory was still going; so the Red O.S.C Ranger through the Delta-Blasters to his future father. "Dad, catch!" he shouted. Rory caught the blasters and fired at Shockwave, sending the emotionless alien flying across the quarry. "Oh, I missed these." Rory commented.

Ross, Kian & Wiktoria were locked in a battle with Trakeena, she was blasting the rangers with her dark power. However, Kian charged forward and struck her with his axe. From the distance, Wiktoria was blasting back at her with rainbow magic; the villain blocked a few times, but was hit with the last one. Ross wanted to defeat his ranger team's enemy, so he channelled all his power into his Quazar-Saber; with one final strike, Trakeena was blasted away. "Nice." Kian stated.

Me and Mikayla were battling Kaita, he threw his fire balls at us; but we fought back hard. I use my crossbow to blast the evil king with lightning, then Mikayla started striking him with her Terra-Grips. The final attack was what we did together, she used her blaster and I used my staff; we defeated Kaita by blasting him with lasers, the final strike blew him away.

Emma and Rose fought against Shredder, his ninja blades could land a hit on the two rangers; they dodged all the attacks. The Blue Ninja Storm Ranger struck him with her ninja sword, causing him to stumble back; he was pushed back even further when Rose threw her shield at him. The finished him with a combined attack; Rose threw her shield again, but this time, Emma jumped on it and rode it like a surf-board. She waited until she sawed past Shredder and struck his armour with a powerful sword swipe.

Finally, Charlie was battling Cyber Racer. The cyborg tried blasting my friend with the Evox Virus, but Charlie blocked all the blasts with his sword. The golden knight used his sword to finish Zombra's villain, with a strike of sun power. When the weapon struck Cyber Racer, he was sent flying into the air; he was destroyed thanks to the blast. When Charlie saw the villain was gone, he muttered, "Goodbye."

Returning to Shaun and King Mondo, the two of them were just about to rap up their battle. Shaun had one last attack that he could use to defeat Mondo, for good; so he powered up one last time. With all his might, Shaun cried, "Zeo 3, Power Punch!" the attack was so powerful, that when it struck Mondo; it destroyed him. "No!" he cried, before shattering into fragments. Shaun cheered a famous battle cry, "Morph-A-Nominal!"

All the rangers came together, Shaun told, "Mondo is destroyed." However, we were shocked to see the remaining four villain standing in the distance; still weak from their fights. Shockwave stated, "He might be gone, but were not."

All eleven rangers stood in a row, they powered up the special attacks, to finish off the villains. Oliver fired his Delta Blasters, Ross sliced his Quazar-Saber, Mikayla used her Terra-Grips, Emma used her ninja sword, Shaun used his Zeo blaster, Charlie powered up his Sonic Sword, & me and the Harmony Force rangers used our magic staffs.

We all fired our special attacks, blasting away the villains; with that final strike, they were defeated.

All the villains began retreating; Shockwave called a space bridge and took Trakeena with him, Shredder threw a smoke bomb on the ground and disappeared, & Kaita turned into an cloud of sand and just wisped away.

When all the villains were gone, Rory stepped forward and stated, "That was legendary."

When all the fighting was over, the rangers from the past returned to their normal lives; Mikayla returned to Kingkow to make sure the kings hadn't sunk the island while she was away, Emma re-opened her dojo to train younger ninjas, Oliver returned to the year 2039, Ross went back to the planet of the Lost Galaxy rangers & Shaun went back to Earth to see his little sister again.

"And as for me and the other rangers; well, we are continuing the fight. To save your dad." But by the time Adam had finished telling the story, Zany was already fast asleep. The boy gently placed the foul in his baby-bed covered him with the blanket. Once he was tucked in, the boy left him to sleep.

Adam left the bedroom and found the rest of the family sitting on the couch; Screwball was snuggling close to Mothball, with no Discord to stop them. Fluttershy smiled when she saw Adam walk out of Zany's room, "I finally got him to sleep." the boy muttered as he sat next to his Pegasus friend. The rest of the evening was quiet, one by one, everypony else started to trot to bed, leaving just Adam sitting on the couch.

"How can we be lost, Hecka-Toad?" Super-Nasor complained. "I thought you said you had a map?" The Master of Water replied, "I did. I put it in my sandwich so I would know where it was."

"And where's the sandwich?" the Master of Earth asked.

Hecka-Toad looked at the floor in shame and replied, "I ate it."

The two of them were hopelessly lost, so they just had to keep walking until they found what they were looking for.