Wiktoria and Kian were out for a run through the Everfree Forest, their new legend powers may have given them new strength, but they need to build up the old strength to. As they ran, Kian had something on his mind; something that he's wanted to ask Wiktoria for a while.

They came to a stop by a tree, they both rested against it for a while. They were both dying of thirst, so Kian asked, "Hey, Wiktoria; would you mind?" The Blue Ranger knew what he was asking for, so she used her new water magic and filled their empty bottles.

While they sat, Kian was still thinking about what he really wanted to ask her.

At the Castle of Chaos, Adam was working on something; something new. Rose was with him, Rory was helping on the farm; Charlie and Heather took Derpy and Dinky for a trip in the Tardis. "So Adam, what exactly is this going to do?" Rose asked. The Yellow Ranger replied, "This is something Celestia told me to make. She wants to help stop these monster and protect her people, so I'm combining magic with tech, and done." Adam held up a new spell card, one that would unlock great power.

"This will allow us to combine our powers with Celestia's. Unfortunately, it only works with the Red Ranger's power; so only Rory can use it." Adam explained. Rose sighed, why did Rory get all the good abilities? However, it did seem like a good way to beat the monsters easier; so she didn't let it bother her.

"It's time for the Selection Ceremony." Malagore stated.

The now Seven Evil Elements stood in a circle once again and presented their weapons; the Master's eye opened up again in the pool of water and shot out it's blast of dark magic.

The energy spun around the room again, until it placed itself on the chosen element's weapon. "Hey, the Master chose me." Fifty-Below stated. Rattle-Bones stepped forward and said, "Remember amigo, don't make the same mistake as Brawl-&-Chain."

Fifty-Below already had a plan to defeat the Power Rangers, instead of fighting them all at once, pick them off one by one. So the yeti summoned a portal and went to the surface world, leaving the rest of the monsters to wait for the outcome. But one monster was in a mood, "When is it going to be my turn Master?" Super-Nasor said into the pool of water. "When can my babies plant their roots and cover the planet?"

He looked in his hand and he was holding small plant seeds, they would grow into monstrous plants.

Suddenly, something came flying into the room; it was a note. Hecka-Toad was the one who caught it, he cheered, "Guys, guys; look what I caught." Malagore snatched the note from the frog and read it out loud.

"This is a message from King Zombra.

I was able to use some of my dark power to send this message; I am trapped in a deeper part of the underworld. I know the Eight Evil Elements are in command.

I request that two of them be sent to try and save me. You must hurry, I can't hold Discord off for very long.

"King Zombra is still alive?" Shriek questioned. Malagore turned to Hecka-Toad and Super-Nasor, "You wanted something to do, Nasor? Take Toad with you, and go find Zombra; use the note's magic to trace it back to him."

The two monsters took the note and wandered of into the caves of the underworld, Super-Nasor was plotting something; something that the other elements would destroy him for, but then he thought, 'not if I get them first'.
===================================================
Kian stood up and was ready to run again, Wiktoria also stood up; they both began jogging through the forest again. As they ran, Kian wondered how he was going ask his friend the thing he wanted to ask; but nothing came to mind.

All the thinking was put on hold when a blast came out of nowhere; the Green and Blue Ranger were knocked to the ground. Wiktoria looked up, she saw the Master of Ice, surrounded by Ghouls; approaching them. "Greetings rangers, I am Fifty-Below. And I'm the one who's going to destroy you today."

The two rangers stood up, the Ghouls were the first ones to attack, so the rangers didn't bother morphing yet.

Five Ghouls jumped Kian, but he fought back. The first one tried to strike him with it's sword, but the ranger dodged it and returned the attack by kick the Ghoul away. The next two were working together, but that didn't stop Kian from rugby tackling them to the ground. Kian then backflipped to kick the last two away.

Wiktoria only had three to deal with, so she made this quick. One Ghoul tried to slice it's sword at her, but when it missed; it ended up hitting another Ghoul. The Blue Ranger fought off the two that were left, kicking and punching at them until the were down.

Once the Ghouls were down, the rangers turned their attention to the monster. It said, "You think your so great for defeating my Ghouls, well, wait until you see this." Fifty-Below opened his arms and a large freeze ray was blasted at the two rangers. Kian acted fast and pushed Wiktoria out of the way, so the freeze ray only hit him.

When the Blue Ranger turned back to her friend, he was frozen in a block of ice; unable to move at all.

"Let my friend go!" Wiktoria cried. But the monster just laughed, "How about this; bring the rest of the rangers to meet me on the battle field this afternoon, and I'll think about freeing your friend." With those words, Fifty-Below and the frozen Green Ranger teleported away.

He turns to the water element and cries, "Toad! Did you take my lunch?!" But Hecka-Toad was playing the innocent, he replied, "I'll admit, I only check your food when I'm hungry."

"But your always hungry." the plant monster replied. "So you have been checking my food."

"Only you would call that cow-pat food."

As the two monsters argued about who stole Super-Nasor's plant food, they didn't notice something coming from the distance. They both stopped fighting and turned to the cave entrance; from the darkness, came a swarm of flying eye-balls with bat wings.

"Hey, cold-cut!" a voice cried. Fifty-Below turned to see the remaining four rangers, in the legend suits. "Give back our friend!" Rory ordered. But the monster just laughed, then ordered, "Ghouls, attack!" The zombie-creatures charged at the rangers, with their weapons, so the Power Rangers fought back.

Adam took a few out with his special attack, "Code 1, Lightning Strike!" The ranger slashed his staff at the Ghouls, the were defeated and disappeared in a purple flash. Rory and Rose fought some off with their staffs, while Wiktoria pushed past the minions and went straight for the main monster.

The Blue Ranger washed the monster away with, "Code 1, Tidal Wave!" it blasted the monster into a boulder. Once Fifty-Below was out of the way, Wiktoria used her magic to break Kian out of the ice.

When the ice-cube broke, Kian fell into Wiktoria's arms, "Hey there." Kian said. His friend asked, "Are you alright?" But he didn't get to answer, when he saw the monster coming back. The Green Ranger stood up and said to his friend, "Give me and sec." 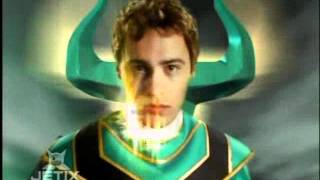 All five rangers stood before the Master of Ice, but Kian took charge of the situation. "This will teach you to freeze me in ice." Kian channelled all his magic into is lion staff, then he unleashed his attack.

"This can't be good." Fifty-Below stated.

Kian chanted, "Code 5, Element of Earth, Stump Smash!" Kian's staff extended to a long length, the head of the staff grew larger. The Green Ranger then brought the staff down, the lion head crushed Fifty-Below; and defeated him.

Before he went, the monster cried, "My precious ice, I'm melting." He then fell backwards and exploded.

Not far away, Shriek and Rattle-Bones were watching the fight. The Master of Wind ordered, "Don't just stand their you bag of bones, resurrect that warrior." However, Rattle-Bones wasn't sure, "I'm not supposed to raise fallen warriors, my lady." That's when Shriek got mad, she grabbed him by his bony neck.

"Bring that monster back to life, or I'll use you for a xylophone!" When she let him go, the Master of Undead began chanting his resurrection spell, "Evil spirits of toil and strife, give this fallen beast new life!" a blast of dark magic was shot from his fingers, it blast the remains of Fifty-Below.

The broken pieces suddenly pieced themselves back together, one the monster was back together again; he grew into the size of a titan. The Master of Ice stated, "TONIGHT'S FORCAST, A FREEZE IS COMING." he stomped his foot on the ground, it almost crushed the rangers.

The monster began to make his way to the town, but something stopped him; the rangers looked to the top of a hill, Princess Celestia was blasting his with here magic. "Rory." she said. "We need to combine." The Red Ranger was confused, but the princess showed them what she meant.

Celestia jumped from the hill and summoned a spell seal, she jumped through it. "Mystic Alicorn!" she cried. The rangers watched her grow into a large Alicorn Zord. Adam stepped forward and remembered, "Oh right, the new power I've been working on for you." he handed Rory the spell card, and then Rory placed in in his morpher.

"Let try this new power." Rory stepped forward in front of his team. "Mystic Phoenix!" he chanted, then he grew into his titan form.

Rory jumped on Celestia and started riding her towards Fifty-Below. 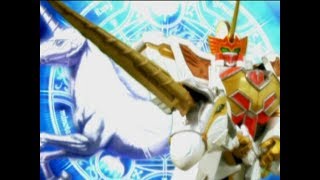 With that final strike, Fifty-Below was destroyed for good. His last words were, "Wow, that's cold!"

Shriek and Rattle-Bones watched the fall of their comrade, they saw no point in sticking around, so they returned to the underworld.

Rory and Celestia returned to the team of rangers, back to their normal sizes. "Well done Rory." Wiktoria stated. And the Red Ranger replied, "And well done Kian, he unlocked his full potential."

"Wiktoria?" he asked. She turned her head to him and listened to what he had to say. "Would you want to maybe, get some dinner later?" Wiktoria's reply was, "I thought you'd never ask."

So the two of them wandered to a restaurant for the evening; they both didn't realise Screwball and Adam watching them. The chaotic pony stated, "About time." And the ranger stated, "I know, right?" That's when they both went home, waiting for what tomorrow brought them.