Adam woke up to the sound of Fluttershy in the kitchen, he got out of bed and found her singing to the birds that flew in through the window. The boy walked up to her a wrapped his arms around her, he started kissing the side of her head and muttering, "Good morning, beautiful." she giggled and continued to make breakfast.

As Adam sat down on the couch, the news was on the TV; the report coming up caught his attention. The reporter commented,

"Can you believe it folks? After the sighting of an alien robot in our city, scientists believed that there could be life out the Earth; and this morning, the theories were proven."

The TV showed a strange yellow liquid contained within a jar, the jar was being taken to the laboratory for the testing.

"Our scientists believe that this yellow liquid, is alive. Alien life, on our planet."

Adam was suddenly scared, Fluttershy sat down next to him and watched the report. She said, "Wow, aliens are real. Who knew?" Adam stood up and ran to the bedroom, he quickly changed into his suit. His girlfriend looked through the door, trying to see what he was doing.

He ran out the room and went straight for the window, until he was stopped by Fluttershy. "What are you doing?" she asked as she pushed him away from the window. The boy turned back to the TV and stated, "Look, that alien life, is dangerous. I've seen them before." Fluttershy hugged close to him, she was scared to now.

"What are they?" she asked.

Adam stroked her hair while she hugged him, he then answered, "Symbiotes." 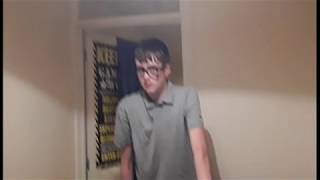 Adam contacted Twilight, they both swung to the lab; they crawled through the vents to get to the main laboratory. Adam saw through on of the ceiling vents, they were right over the lab where the symbiote was being kept.

Twilight crawled next to him and asked, "So what's the plan, exactly?" Adam removed the vent and crawled down into the room; no one was here, so they could take the ooze without being noticed. Adam walked over to the container, he glared at the jar of living slime.

Just as he was about to grabbed the jar, his spider-sense went off; someone was coming. He leaped onto the ceiling and waited for the incoming person. The labs door opened, a kid with camera walked in; Adam recognised the kid from the night he captured Tombstone. "Babs Seed. Apple Bloom's bratty cousin." he whispered.

Babs Seed was a photographer for the school paper, she still believe that Spiderman was a menace, and tried her best to prove that she was right.

The kid walked over to the jar, she began taking pictures of it. She muttered, "Totally worth braking in here." When Spidey heard that, he couldn't do anything about it. If Adam turned her in for breaking in, he would get done for braking in as well.

Spiderman and Spider-Girl couldn't steal the dangerous symbiote while people were here, so they decide to leave and come back for it tonight. They both crawled back through the vents and left the lab.

Meanwhile, once Babs Seed had finished taking photos, she turned around to leave; but when she turned, she knocked the jar over. The container smashed, the yellow slime fell onto the floor; the kid moved back as the slime started moving towards her, like it was alive.

She was backed against the wall, the symbiote reached her, and started to bond with her body. The slime covered her entirely, so she blacked out.

When she woke up, she was in a strange place; it was covered in cobwebs and yellow spiders. She could here a voice in her head.

The kid was confused, but the she began to seem images; images of what could happen if she excepted the power. She started to like what she saw, it looked incredible.

"All you have to do is let me bond with you."

All Babs Seed could say was, "I'm all yours."

The yellow spiders crawled down from their webs and swarmed her body, they began covering her with the yellow ooze. She could feel herself getting stronger, the power was the one thing she need to rid the world of Spiderman, and now....

Both Babs Seed and the symbiote said this at the same time, "We are Scream!"

Babs' woke up with the symbiote suit on her, she was ready.

She laughed like a maniac before jumping out the window and swing off into the city.

Spiderman and Spider-Girl came back to the lab that night, however, the police had already arrived at the building. The two spiders leaped down to Captain Shining Armour, they wanted to know what was going on.

Twilight had to disguise her voice, but she asked, "What happened here, captain?" The captain of the police took them inside the lab; in the main laboratory, the heroes saw the broken jar and missing ooze. Adam became very worried, a symbiote on the loose meant nothing but trouble.

Once the heroes had gotten the information needed, they swung off into the city. They swung all the way back to HQ, the needed to let the rest of the team no of the incoming crisis.

Adam decided to explain just how dangerous symbiotes are, the girls all gathered in the main room, waiting to here the story.

"Symbiotes come from the planet, Klyntar. They need human hosts to survive on Earth, so they bond to humans; it gives the human host powers similar to mine. If were dealing with a symbiote, then we need to find it, and destroy it." the boy explained.

The team all came to an agreement, but they needed to find the symbiote. What they don't know, is that it's already found a host. The heroes all assembled; Spiderman, Spider-Girl, Quicksilver and even Nova showed up. The four super-heroes all went out into the city, the hunt for the symbiote had begun.

However, there was another situation happening, right inside the HQ. Sunset Shimmer and Rarity were walking past the kitchen when they heard screaming; they barged into the room, only to find Pinkie Pie....all over the place.

Her arms had grow so long that they reached the other side of the room, her legs were stretched along the ground like the wires in Twilight's lab, she couldn't move any of her limbs. Pinkie looked at her friends and said, "Hey guys, just...stretching my legs." she giggled at her own joke. The other girls were both concerned and freaked out, what could have caused this?

"Pinkie, how did this happen?" Sunset asked. The party girl tried her best to explain, "When I was in Twilight's lab with Rainbow Dash and Applejack, we accidently spilled some crazy blue liquid onto ourselves; but don't worry, only me and Rainbow got splashed." Rarity stepped forward and stated, "Well, that explains where Rainbow got her powers."

The two girls tried to gather up Pinkie, she tried to retract her extended arms and legs, but even she had no idea how to control this.

Out in the city, the team had been looking for a hour, they've covered the entire city. Twilight was the first to speak, "Guys, I don't know about you, but we should call it a night." The others agreed, though Spiderman was still concerned, he wanted to find this alien menace.

However, he followed the others, they all went home. Little did they know, they were being watched the a certain new villain. Scream came out of her hiding space, she watched the heroes leave, "Don't worry super-heroes, you'll be seeing what I have planned very soon.

While the villain swung through the city, the symbiote started talking to her, "We need to get the rest of my kind here, from my dimension." Babs Seed was confused for a sec, this thing came from another dimension? The alien goo continued, "I was sent by my master, this symbiote already has a host; some even call him, the first. The first of our kind to come to Earth. We must build a portal to get the rest of my brother to your world."

Babs understood, the two of them had some work to do. Someone was coming, he wants revenge on a certain spider, I think you all know who he is; your kind call him...…. VENOM!!!